“Prisoner of the Reds”

American scientists are defecting at an alarming rate, leaving only a super-convincing goodbye note in their wake.

Donald Blake notices the trend, and thinks that is suspicious. With the blessing of the military, he pretends to work on a biological warfare weapon, and a story is leaked to the press about it. 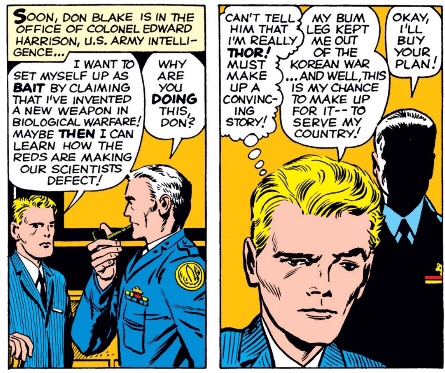 Blake is quickly kidnapped by “the Reds” and brought to a prison behind the Iron Curtain. Apparently, all the scientists that defected were actually hypnotized and are being held against their will. Luckily, Blake still has his cane; predictably, Thor makes quick work of “the Reds.”

This is another issue that isn’t quite good, but is silly enough to be a pleasant read. It is clumsy propaganda, but what do you expect in this era?