“Thor and the Mighty Stone Men From Saturn!”

Rock creatures from Saturn land on Earth and prepare to conquer the planet. However, they happened to land in Europe, near where American Doctor Donald Blake is vacationing. He happens upon the aliens, and hides to avoid them. While hiding in a cave, he discovers a hidden room and a weird-looking cane.

By striking the cane, Blake is transformed into the mighty Thor, demigod of Norse mythology!

With Thor’s might, the aliens are driven away from Earth.

Not especially. Space aliens seem like a silly way to introduce a character from mythology, and the arbitrary rules about Thor’s powers are just weird. The art has some impressive moments, though. I especially liked the cover and the corresponding scene that explains that Thor doesn’t fly, he is basically riding his thrown hammer. That’s not an easy concept to illustrate, but I think Kirby pulled it off. 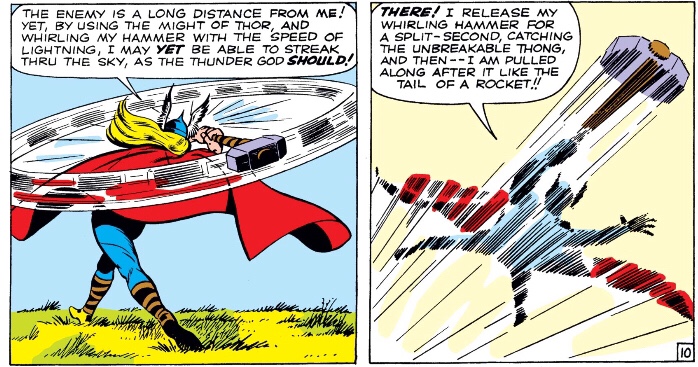 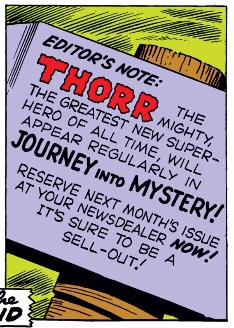 Journey Into Mystery is another of Marvel’s anthology titles. There were three other stories in this issue, but nothing else with super-heroes, so I’m ignoring them.